On the Day of Russian Science, the Ministry of Education and Science of Russia celebrated the participants of the Leaders of Russia competition

February 8 is the Day of Russian Science. It was established by the Decree of the President of Russia B.N. Yeltsin on June 7, 1999 and is timed to coincide with the founding of the Russian Academy of Sciences and the Academic University by Peter I in 1724. Finalists and winners of the Science track of the Leaders of Russia competition - the flagship project of the presidential platform Russia - the Land of Opportunities - make breakthrough scientific discoveries; develop space programs and launch satellites; open innovation laboratories and scientific information centers; are engaged in the popularization of scientific and technical knowledge; study diseases and develop new drugs for their treatment; carry out sociological research based on big data and research work on the development of transportation systems in Russian cities. Finalist of the Science specialization of the Leaders of Russia 2020 competition, head of the research department for integrated transport development at OJSC NIIAT, Tatyana Mikheeva from Moscow, is engaged in scientific research of public transport systems in Russian cities, and also develops innovative solutions for the transport development of Russian regions. Tatiana graduated from the Russian University of Economics named after G.V. Plekhanov with a degree in National Economy. She worked in a consulting company as a manager of regional projects in the industrial sphere, then moved to a research institute that deals with the development of road transport at the city, regional and federal levels.
One of Tatiana's most ambitious projects was the implementation of a comprehensive transport plan for the 2018 FIFA World Cup in Russia. She organized the movement of volunteers and fans in all 11 participating cities, taking into account the capacity of their transport infrastructure and stadiums.

“I have always liked doing scientific research, but over time I realized that it is more promising to engage in applied areas of work in order to qualitatively improve people's lives. Therefore, I chose such a field of activity as transport planning. It is exactly at the interface between theoretical science and engineering design. The solutions that are developed within the framework of transport planning have the most direct impact on people's livelihoods. After all, the circulatory system of any economy is transport. If transport works poorly, then the economy will not develop either ",
- says Tatiana Mikheeva.

Tatiana's work covers several key areas. The first direction is scientific research to improve passenger transport in public transport. In her opinion, at the moment the industry is experiencing difficulties associated both with the deterioration of infrastructure and rolling stock, and with problems in the competent management of the transport complex, therefore, new solutions are needed here, including those based on digitalization of processes and the use of big data. The second direction is planning the development of transport infrastructure facilities (bridges, roads, etc.), developing solutions for regional and city authorities on the distribution of traffic flows, increasing the availability of infrastructure for people and rational use of budget funds. Tatiana's work consists in applied research, forming proposals for improving transport policy in cities and regions of the country, building new infrastructure facilities, as well as new formats for managing the transport industry. As a manager, Tatyana Mikheeva has implemented projects in cities such as Kazan, Ufa, Khabarovsk, Kursk and Kaliningrad.
Tatiana is also a UN expert on sustainable urban development

transport, and in 2018 was marked with the official Commendation of the Minister of Transport of the Russian Federation for the achievements in labor.

“Now I am working on an innovative solution to ensure transport accessibility for sparsely populated or remote settlements by introducing new types of transportation. It is very important to make public transport in such areas of the country convenient and accessible for residents, and at the same time economically viable for business. We have prepared proposals for the work of an innovative transportation model and the corresponding regulatory framework for launching this initiative. I hope that pilot projects in certain regions will be launched this year, and over time this practice will spread throughout the country, ”
- said Tatiana.

In 2020, Tatyana Mikheeva became a finalist in the Science specialization of the Leaders of Russia competition. According to her, participation in the competition has become a kind of school of life, each participant received an impulse and motivation for further development.

“The competition in the track“ Science ”among the Leaders is, of course, necessary. Russia, as a leading power, must support the development of the scientific sector. Only this will make it possible to firmly occupy a leading position in the world economy. Therefore, the Leaders of Russia competition is an important project identifying and promoting key leaders in science. Such contests are very necessary: ​​they solve both a communication problem and issues related to the development of new approaches to solving scientific and managerial problems. I hope that in the new season the track "Science" will be repeated, which will be even better and more interesting ",
- Tatiana Mikheeva summed up the conversation.

The full version of the article is available on the website www.minobrnauki.gov.ru 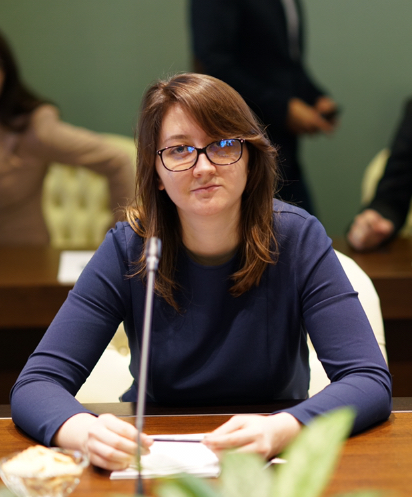