On March 19, an extended meeting of the Coordinating Board of Representatives of motor and urban land-electric transport affiliated to the RF Ministry of Transport was held under the chairmanship of Deputy Transport Minister Nikolay Asaul 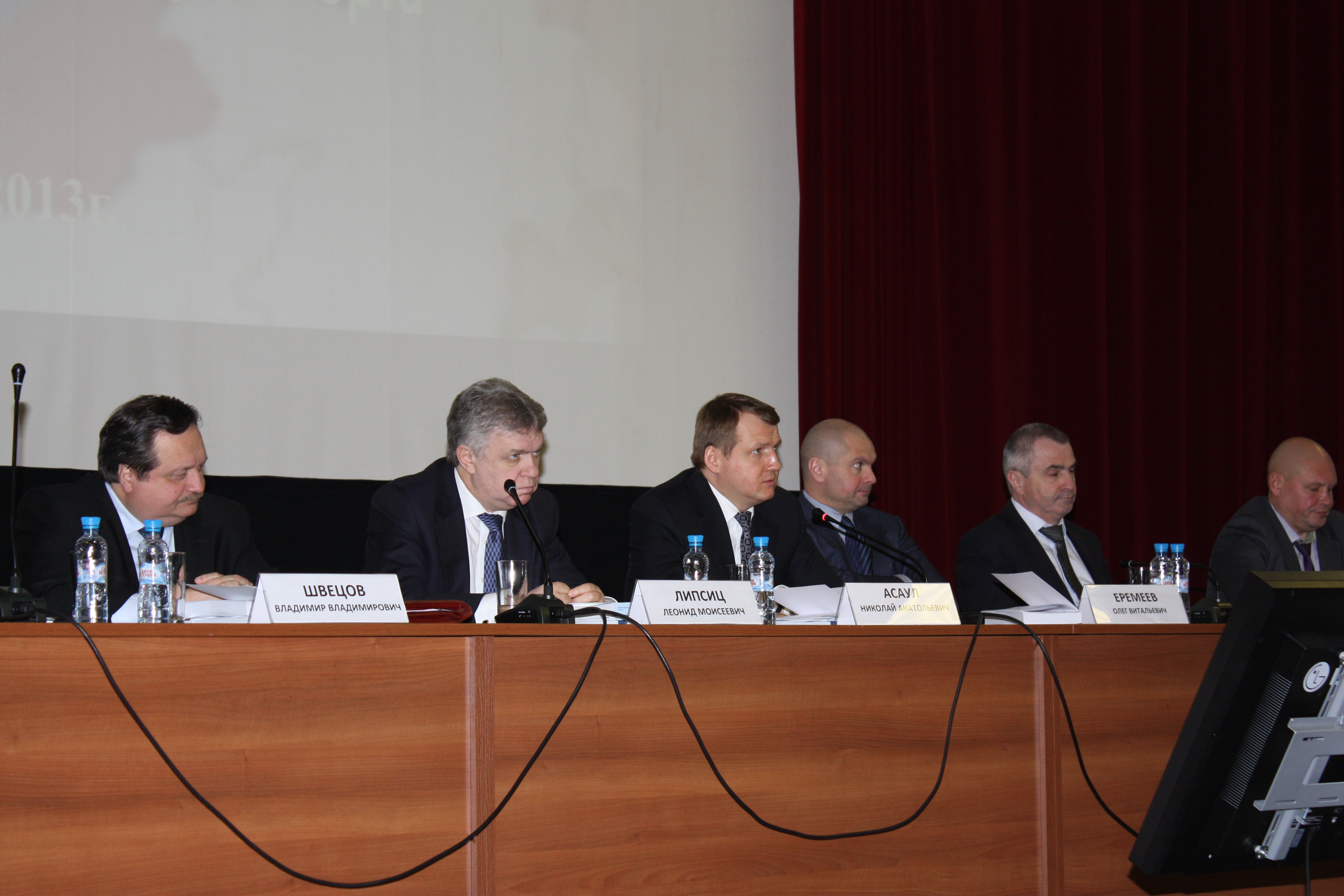 The meeting of the Coordinating Board, which is traditionally held in the building of Institute of Road Transport, was attended by the members of the Coordinating Board, representatives of motor and urban passenger transport, executive authorities of subjects of the Russian Federation, territorial and sectorial research organizations, leaders and representatives of federal agencies, the central office of the RF Ministry of Transport.

N. Asaul mentioned in his speech some important achievements of the past year. In particular, he addressed the shortage of foreign bilateral permits - Russian carriers were provided with 1 million and 300 foreign permits. "It means a consolidation of the position of national carriers on the international freight market", - said N. Asaul.

A lot of work was done on the normative legal support of enforcement in drivers’ work-rest ratio in 2012. All obligations related to the European Agreement concerning the international motor transport were almost fully implemented.

During the meeting of the Coordinating Board Deputy Minister informed on the new structure of the Working Group of Korsovet which works on the development of light rail transport in the subjects of the Russian Federation. The decision on the establishment of the working group was adopted at a meeting of the Board of RF Ministry of Transport in October 2011. The initiative group was formed from among the experts of the industry, representatives of the regions, who are developing and are interested in the development of light rail.

Leonid Lipsits, the Director of the Department of State Policy for Motor and Urban Transport of RF Ministry of Transport spoke on the "Progress of motor and urban transport in 2012 and tasks for 2013”. He noted that in 2012 the volume of motor freight transportation, compared to 2011 increased by 3.4% and amounted to 5.8 billion tons. Motorists have transported 55% of the total volume of all types of cargo.

In international traffic the share ratio of import and export volume of traffic on the Russian market did not change and amounted to, respectively, 74% and 26%. Intergovernmental agreements on international motor transport with Finland, Jordan, Abkhazia, South Ossetia and Switzerland were prepared over the past year. In addition a number of arrangements have been made and more than 156,000 permits for 19 countries were received, including the deficient category permits, Germany, Greece, the Netherlands, Italy, Poland.

According to L. Lipsits this work has become particularly relevant in an increasingly competitive environment caused by the opening of the borders of the Customs Union between Russia, Belarus and Kazakhstan. "The activities of RF Ministry of Transport are directed on maintaining the interests of the national carrier," - he stressed.

Since 25 April, 2012 the motor transport of dangerous goods has been carried out in accordance with the requirements of the European Agreement concerning the International Carriage of Dangerous Goods by Road (ADR). In order to implement the provisions of ADR, the Department has prepared a number of important regulatory enactments.

L. Lipsits also noted that in 2012 120,000 buses and 13.6 thousand trucks carrying dangerous goods were equipped with the GLONASS satellite navigation. Passenger transport of over 1000 companies - carriers in 52 regions was fully equipped with navigation. According to the applicable regulatory acts, about 150,000 buses and 22,000 vehicles carrying dangerous goods are still to be equipped.

In the past, the work on the regulatory and legal support enforcement of drivers’ work-rest ratio was carried out. The Russian Federation is a member of the 1978 European Agreement Concerning the Work of Crews of Vehicles Engaged in International Road Transport (AETR), and complies in full with its requirements. This applies to both work-rest ratio of drivers, as well as the design of control devices. RF Ministry of Transport adheres to the provisions of the AETR and keeps track of its compliance with international law and the interests of the Russian carriers.

Summing up the work results of the Agency of motor transport, the head of "Rosavtotrans" Sergei Sukharev started with one of the main functions of the Agency - the register of routes of regular passenger buses in international traffic. At the beginning of 2013 the registry comprised of 494 routes between the Russian Federation and 19 foreign countries. The largest number of routes was agreed to Ukraine (107 routes), Kazakhstan (104 routes), China (82 routes), Germany (34 routes), Belarus (34 routes) and Moldova (31 routes). Register of regular international bus routes is published and regularly updated on the official websites of the Agency and the RF Ministry of Transport.

Sukharev said that the agency regularly participates in the meetings of the working groups, bilateral joint commissions on motor transport, where the information on the coordination of the routes is shared and critical issues of passenger buses is discussed. The issues related to the opening of routes between Russia and Armenia, Russia and Turkey in transit through the territory of Georgia are also being discussed in cooperation with the RF Ministry of Foreign Affairs.

Currently, the staff of the Agency is working on the registration of applications received and evaluation of works on installation, inspection, maintenance and repair of tachographs. The list of service centres and shops started to take shape in April 2010 and currently comprises of 377 service centres.

In conclusion, Sukharev said that the Agency has gone a difficult way of formation and development in the short period of time. Today "Rosavtotrans" is the central unit which is comprised of 10 departments, a branch network of 10 branches in all federal districts that are actively involved in addressing the issues for maximizing the effective functioning of the automotive industry and improvement of motor transport.

A. Vasilkov, President of the National Association of the motor and urban passenger transport, addressed in his speech the RF Ministry of Transport of Russia with a request to speed up the adoption of the draft law "On the organization of regular passenger and freight motor transportation by inter-regional routes ..." and asked to avoid the occurrence of unfair competition between carriers during the process of coordination of international routes.

First Deputy Prime Minister of the Volgograd region Roman Grebennikov in his report paid particular attention to the problem of deterioration of the urban passenger transport. Volgograd region has received a grant from the RF Ministry of Transport for $ 150 million to upgrade the transport in the past year. However, the region requires far more subsidies in the next 3-5 years for a substantial renovation of the transport.

Director of the Nizhny Novgorod region Department of Transportation, Alexander Zubarev also confirmed the interest of the region in the extension of the federal subsidy program for the renewal of public transport rolling stock. Last year, Nizhny Novgorod region received 100 million roubles for the purchase of 20 trams.

Representatives of both entities also informed the participants about the on-going work on the development of light rail transport (LRT).

In continuation of this topic, Deputy General Director of JSC "NIIAT" and also the head of the Working Group of Korsovet which works on the development of light rail transport Andrew Deriagin said that the main objective of the group is the elaboration of the financial and economic model of LRT development.

Chairman of the Association "Mezhregionavtotrans" Sergei Khrapach in his report addressed the RF Ministry of Transport with a proposal to support the initiative of the Common schedule of buses on inter-regional and international routes. Nicholay Asaul confirmed the need for such a service.

Head of the research department of "NIIAT" Dmitry Yenin made a report on the issue of transport accessibility by people with limited mobility.

President of the association "Avtoresurs" E. Volohov appealed to the Ministry of Transport with a request to work out the mechanism of stimulation of automotive companies to participate in the formation of army type columns.

The issue of the purchase of tachographs have been raised by the representative of the Group of Companies "Magnit".

The representative of the company Krasnoyarskavtotrans asked if it were possible in future programs of co-financing to provide an opportunity not only for subsidies for the purchase of NGV buses, but the buses operating on liquid fuel as well.

The Director of the first motor pool G. Stern suggested the Ministry of Transport to consider features of work and rest ratio of drivers working on long-haul freights in the revised draft order number 15.

The Executive Director of the Union of Motor Entrepreneurs of the Sverdlovsk region Lily Saranchuk raised the issue of different prices on the services of regional navigation and information systems.